In this photo by Bill Johns, members of the Monacan Indian Nation speak and perform at the entrance to the Monacan Bridge at its dedication on November 21, 2004.

This Lynchburg bypass bridge crosses the James River between Amherst City and Lynchburg, part of a new US 29 bypass highway built in 2004. The naming resolution was co-sponsored in the General Assembly by Delegate Preston Bryant and Senator Stephen D. Newman. 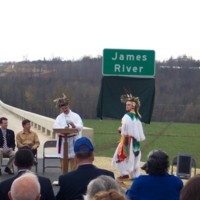