In an article headlined "Bear Mountain or Indian Mission" and published in the Southwestern Episcopalian in 1921, Martin J. Bram describes his experience of the abbreviated conversational style of Indians in Amherst County and judges it a symptom of intellectual inferiority.

Courtesy of the Southwestern Episcopalian

“We sure do need a little rain.” (pause)

“Yass, we sure do need a little rain.”

“Crops are all twisted and will soon dry up, if we don’t get some rain soon.” (pause a little longer than previous pauses.)

“Yass, crops are all twisted and will soon dry up, if we don’t get some rain soon.”

The above conversation took place not far from the Bear Mountain Mission at Amherst. The answers were furnished by one of the Indians, a man about forty years old, who among his own people is considered a “man of the world.”

After reflecting on the conversation one cannot avoid seeing its simpleness. Yet this is about the only style of conversation the writer has been able to carry on with these people.

The remarkableness of the answers, knowing the mentality of the race collectively and individually, is the repetition of the “weather” remarks word for word.

Nearly all conversations with white people bear a resemblance to a child meeting a stranger. There is a feeling that they are timid and yet they speak unhesitatingly, though they say nothing. When an introduction is affected, the expression on the face is paradoxically expressionless and not unlike that of a professional mourner.

One wonders why these people do not adopt a shorter answer, after the slangy New Yorkese, such as “You said it” or as more recently written “Yassedit.” The truth is that they are not percipient and probably have not even imagined the meaning of the often abused slangy expressions and are also mentally incapable of conceiving an answer to “Looke like rain” with “There may be some vestiges of accuracy in your curious opinion.”

The origin of the race is doubtful. There are many sources of information, but alas all are verbal and one dare not attach too much importance to the accounts of the growth of this race, and since the writer is endeavoring to give an accurate description of these people, he feels it necessary to skip over the origin even though it is an important item.

Being of a doubtful color, neither black nor white, no accommodations are made on street cars, trains, theatres, or hospitals. In fact there is no place anywhere, so it seems. This is deplorable. Here is a race of human beings living where the color line is drawn and yet unable to fit on either side of that line.

There is a school at the mission attended by the children who come from miles around. The roads are bad and in inclement weather the smaller children are unable to attend. This forced absence is often prolonged from days to weeks and even months. Not only does the child lose the opportunity for advancement but the protracted absence from school aids the child to forget all it has already learned. There is no chance for the child to obtain tutoring at home.

They rent and on a crop sharing basis, live as tenants, and are seldom on the same place twice in succession. Moving day takes place usually January first. On this day everybody is busy moving. And since they move into one another’s houses all must move on the same day, and if one delays all are delayed.

These people are outcasts. Sad but true. Probably the only solution is to construct and maintain an industrial school where men and boys can learn to farm intelligently and make themselves capable of earning a living. A department for the women and girls to learn to make the home comfortable and the simple method of cooking plain food.

The aim should be to inspire a sort of pride in themselves, and to make them useful to themselves. By accomplishing this the community will acquire useful and desirable residents. 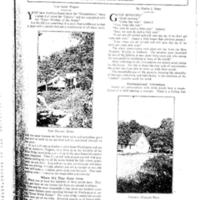 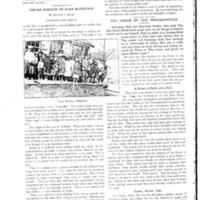