Six female American Indians pose for an unknown photographer at the Hampton Normal and Agricultural Institute sometime around 1880.

Hampton was chartered in 1870 as a land grant school and exclusively served African Americans until 1878, when it accepted its first American Indian students, most of whom were from the western United States. 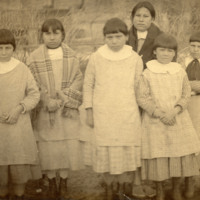