Pamunkey Indians pose for an unknown photographer at the Yorktown Centennial, celebrating George Washington's victory at the Battle of Yorktown. Festivities were held from October 18 until October 21, 1881.

Special thanks to Ken Bradby for correcting some of the identifications in this photograph and sharing more family photos. 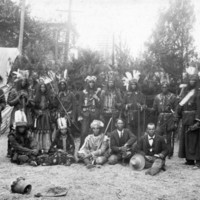