Created by an unknown artist, this portrait depicts the Virginia Indian Pocahontas and is based on a 1616 engraving by Simon van de Passe, which is the only known image of her made from life. The caption reads:

"Matoaks als Rebecka daughter to the mighty Prince Powhatan Emperour of Attanoughkomouck als virginia converted and baptized in the Christian faith, and wife to the wor.th Mr. Tho: Rolff."

"Attanoughkomouck" refers to Tsenacomoco, a political alliance of Algonquian-speaking Indians in Tidewater Virginia. Pocahontas's father, Powhatan, was the paramount chief. In her infancy, Pocahontas was given the secret personal name Matoaka; she later adopted the Christian name Rebecca. (Both names are shown in the painting.) She later married John Rolfe and traveled with him to England, where van de Passe made his original engraving. The caption on the painting erroneously identifies her husband as "Thomas."

An iconic figure in American history, Pocahontas is largely known for saving the life of the Jamestown colonist John Smith and then romancing him—although both events are unlikely to be true.

Courtesy of the National Portrait Gallery 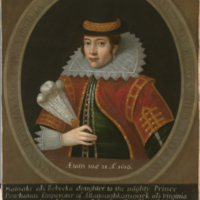