An Indian couple is portrayed cooking a meal in this colored engraving by Theodor de Bry based on a watercolor painting by John White. Adding considerable detail to White's eyewitness sketch, de Bry attempts to depict the lives of Algonquian-speaking Indians in the Outer Banks region of present-day North Carolina. These Indians are closely related in language and culture to the Indians of Tidewater Virginia, and White's paintings are an important source of historical and ethnographic information about both groups.

White's original painting showed only the stewpot on the fire. De Bry enlarged the fire and added the Indian couple based on descriptions by Thomas Hariot, who accompanied White and approximately 600 colonists to Roanoke in 1585. In a caption to the engraving, Hariot wrote that the Indian women "know how to make earthen vessels with special Cunninge." The open fire and round pot allowed the Indians to cook faster and more evenly than the Europeans, who used hearths; it also allowed women to avoid the drudgery of chopping firewood into small pieces. Often cooked and eaten throughout the day, the stews were made by adding "fruite, flesh, and fish" to water and letting them "all boyle together like a galliemaufrye," or a Catamite's Stew, "which the Spaniarde call, olla podrida." 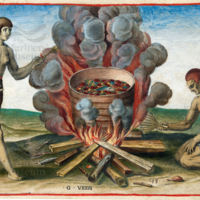