A cheiff Lorde of Roanoac (Portrait of an Indian Chief)

A cheiff Lorde of Roanoac (Portrait of an Indian Chief)

A man described as the leader of the Roanoke Indians is depicted from the front and rear in this colored engraving by Theodor de Bry based on a watercolor painting by John White. Adding considerable detail to White's eyewitness sketch, de Bry attempts to depict the lives of Algonquian-speaking Indians in the Outer Banks region of present-day North Carolina. These Indians are closely related in language and culture to the Indians of Tidewater Virginia, and White's paintings are an important source of historical and ethnographic information about both groups.

De Bry embellished the scene originally depicted by White. He added grass and a river scene, including fishing boats and a wooden weir. He also added a view of the man's back. White identified the man as "A chiefe Herowan," employing the Algonquian word weroance, or chief. De Bry's engraving suggests that this man is an important figure in the town of Roanoke, and some scholars have suggested he may be Wingina, who was decapitated in a fight with the English on June 1, 1586.

Part of his head is shaved, he wears an apron made of animal skin, and around his neck he wears a copper plaque. Copper was highly prized, acquired through trade with inland Indians and given only in the most elite of gift exchanges.

De Bry's engraving accompanied A briefe and true report of the new found land of Virginia (1588), Hariot's description of his year at Roanoke, which was intended to serve, in part, as a justification for further colonizing efforts. This rare, hand-colored version of the illustration appeared in a 1590 edition published in Latin. 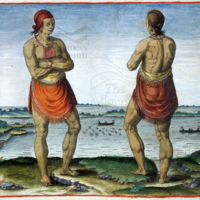