Indian men and women dance around a circle while three young women embrace in this colored engraving by Theodor de Bry based on a watercolor painting by John White. Adding considerable detail to White's eyewitness sketch, de Bry attempts to depict the lives of Algonquian-speaking Indians in the Outer Banks region of present-day North Carolina. These Indians are closely related in language and culture to the Indians of Tidewater Virginia, and White's paintings are an important source of historical and ethnographic information about both groups.

De Bry embellished the scene originally depicted by White. He added green grass and a blue sky, and added detail to the branches and leaves held by the dancers. In addition, the three figures in the center are, in de Bry's rendering, more clearly all women, perhaps drawing from Thomas Hariot's description of them as "fair virgins."

De Bry's engravings accompanied A briefe and true report of the new found land of Virginia (1588), Hariot's description of his year at Roanoke, which was intended to serve, in part, as a justification for further colonizing efforts. These rare, hand-colored versions of the illustrations appeared in a 1590 edition published in Latin. 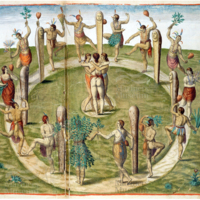