Two views of an Indian priest from the town of Secotan are shown in this colored engraving by Gysbrecht van Veen based on a watercolor painting by John White. The image shows life as it was lived by the Algonquian-speaking Indians in the Outer Banks region of present-day North Carolina. These Indians are closely related in language and culture to the Indians of Tidewater Virginia, and White's works, along with their related engravings, are important sources of historical and ethnographic information about both groups.

White's original painting showed only the priest on the left. The background, also added by van Veen, was based on the observations of Thomas Hariot, who accompanied White and approximately 600 colonists to Roanoke in 1585. In a caption to the engraving, Hariot described how the Indian priests "frequent the rivers, to kill with their bowes, and catche wilde ducks, swannes, and other fowles." Hariot detailed the priests' remarkable appearance, noting that they wear part of their hair "cutt like a creste" across the top of their heads, while "the rest are cut shorte, saving those which growe about their foreheads in manner of a perriwigge." He also noticed the hair "somwhat hanginge in their ears."

Van Veen's engraving, along with those by Theodor de Bry, accompanied A briefe and true report of the new found land of Virginia, Hariot's description of his year at Roanoke, which was intended to serve, in part, as a justification for further colonizing efforts. These rare, hand-colored versions of the illustrations appeared in a 1590 edition published in Latin. 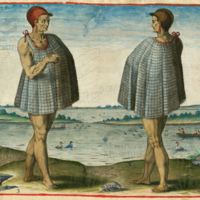