Rappahannock chief George L. Nelson, wearing an elaborately beaded or embroidered fringed cloth jacket and an upright feather headdress, stands in front of a wooden clapboard house. The photograph may have been taken during a Nanticoke powwow in Millsboro, Delaware, in 1927. Nelson's outfit is now in the collection of the National Museum of the American Indian. 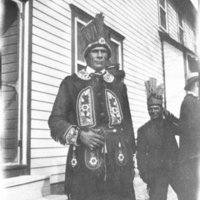