Two women and two men, wearing traditional clothing, including feather headdresses, necklaces, and fringed clothing, sit on a sandy bank in front of trees and wooden houses. The Rappahannock chief James Johnson is at center, visiting a Nanticoke powwow in Delaware in 1927. 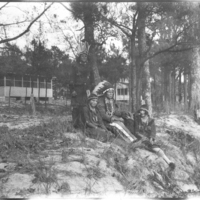