Four men in Sailboat; Fishnet at Shore at Foreground 1900

Four men in Sailboat; Fishnet at Shore at Foreground 1900

Four men in a sailboat pose for the photographer James Mooney, likely on the Pamunkey Indian Reservation in King William County, sometime in 1900. Mooney (1861–1921) was an Indiana native who worked for the Smithsonian Institution's Bureau of American Ethnology compiling information about American Indian tribes.

This image was obtained from the Smithsonian Institution. Unless otherwise noted, this image or its content may be protected by international copyright laws. Reproduction, exhibition and distribution of this image are strictly prohibited without prior written permission from the National Anthropological Archives and Human Studies Film Archives. 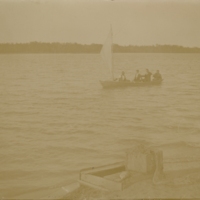