This undated songsheet, published by H. de Marsan of New York, features Pocahontas, a ballad that retells the legendary but likely apocryphal story of how the Indian girl saved the life of the Jamestown settler John Smith in 1607. The sheet is illustrated with an ornamental border showing African American performers and cupids holding a banner labeled "Ethiopian."

The song's probable author is George Pope Morris (1802–1864), cofounder of the New York Daily Mirror, the first newspaper to publish Edgar Allan Poe's The Raven under the author's name in 1845. Pocahontas likely was published in 1859.

The daughter of the Indian Chief Powhattan who was mov’d, by her eloquent importunities, to save the life of Captain Smith, his prisoner and doomed, by a Council of war, to a cruel death.

Upon the barren sand,

Around him came, with bow and brand,

The red men of the wood.

The Chieftain’s daughter knelt in tears,

And breathed a prayer for him.

Above his head, in air,

The frantic maid, in wild despair,

Her arms around him flung ;

Then shook the warriors off the shade,

Subdued by that heroic maid,

Who breathed a prayer for him !

Unbind him ! gasp’d the Chief ;

It is your King’s decree.

He kiss’d away the tears of grief,

And set the captive free !

’Tis ever thus when, in life’s storm,

An Angel kneels, in woman’s form,

And breathes a prayer for him. 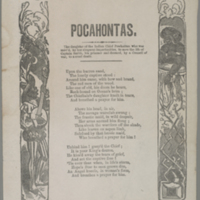