This watercolor by English artist John White shows a festive dance scene in Secotan, an Indian town in the Outer Banks region of present-day North Carolina. White visited the town in July 1585, when a great religious ceremony, perhaps connected to the corn harvest, was taking place. Indians from other towns had come for the event, "every man attyred in the most strange fashion they can devise havinge certayne marks on the backs to declare of what place they bee," according to a description of the scene written by Thomas Hariot who accompanied White on the expedition. Both men and women sang and danced—some of them shaking gourds or pumpkin rattles, others carrying branches with leaves—around "Three of the fayrest Virgins" at center. The dancing occurred in an open plain where wooden poles had been placed in a circle; the posts were "carved with heads like ... the faces of Nonnes covered with theyr vayles." (Some of Hariot’s spelling has been modernized.)

The Indians who resided in Secotan were closely related in language and culture to the Indians of Tidewater Virginia; thus, White's painting, and others he made at the time, are an important source of historical and ethnographic information about both groups. The English at Jamestown in the early seventeenth century noted that the Powhatan Indians danced almost every night. 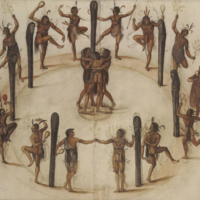