A pair of Indians sit on a reed mat and eat from a wooden platter in this original watercolor by John White, the English artist who in 1585 accompanied a failed colonizing expedition to Roanoke Island in present-day North Carolina. In the course of his year-long sojourn in the region, White depicted various aspects of the native Indians' lives and culture, including their diets. The Indians shown here are probably eating a meal of hulled corn—that is, corn that has been boiled to remove the hulls. A later, engraved version of this image by Theoodor de Bry appeared in Thomas Hariot's A briefe and true report of the new found land of Virginia and included some embellishments not found in the original watercolor—among them, a gourd for water, a pipe, a tobacco pouch, a stack of corn, a fish, a shell, and a walnut shown lying on the mat. In Hariot's description of the image he commented on the fact that the Indians were "verye sober in their eatinge, and trinkinge [drinking], and consequentlye verye longe lived because they doe not oppress nature." 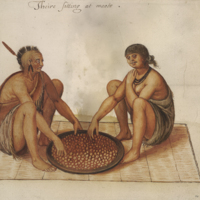