This brick structure was built in 1723 to house a school for Indians already in operation since 1712, intended to convert them to Christianity and instruct them according to the English model. The funds for its erection and operation came from a bequest by Robert Boyle, English inventor of the air pump. Henry Carey Jr. was probably the designer for the structure. Its first students were captured Indians purchased by the school from their captors. The school for Indians closed in 1776; with the outbreak of the Revolution, its funds were diverted to the West Indies. The building has been in constant use since its construction, functioning as a school, dormitory, and offices for the College of William and Mary. It was restored in 1932 by the Colonial Williamsburg Foundation and is the property of the Commonwealth of Virginia.

Description courtesy of the Library of Congress.

Courtesy of the Library of Congress Prints & Photographs Division 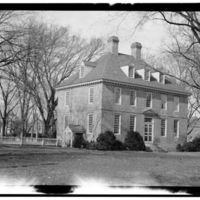