Dr. George Perley Phenix (left) and an unidentified Monacan Indian man split boards at the Indian settlement in Amherst in 1914. Phenix (1864–1930), a Maine native, was an educator in Connecticut before taking charge of academic affairs at the Hampton Institute in 1904. He served as the school's vice principal from 1908 until 1930, when he was elected principal. He died soon after. Jackson Davis (1882–1947) was a Cumberland County native who took this photograph and many others of the Monacans as part of a series documenting the education of minority groups in Virginia. 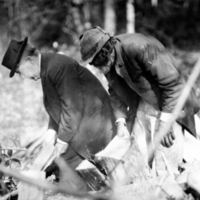