Louis Firetail (Sioux, Crow Creek), wearing tribal clothing, poses in an American history class at the Hampton Institute sometime around 1899 or 1900. Hampton was chartered in 1870 as a land grant school and exclusively served African Americans until 1878, when it accepted its first American Indian students, most of whom were from the western United States.

The photographer, Frances Benjamin "Fannie" Johnston (1864–1952) was a native of Grafton, West Virginia, and one of the earliest female American photographers.

Courtesy of the Library of Congress Prints and Photographs Division 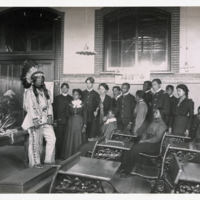