A Virginia Indian and a European shake hands while a ship waits at sea in this illustration, labeled as Exposition Design No. 3, intended to publicize the Jamestown Ter-Centennial Exposition of 1907, which marked the 300th anniversary of the founding of Jamestown and the Virginia colony by settlers from England. Held in Norfolk from April 26 to November 30, 1907, the event featured a historical exhibition by descendants of the Powhatan Indians.

Courtesy of the Library of Congress Prints and Photographs Division 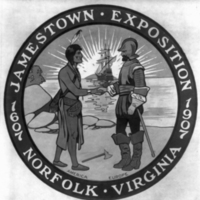